The Federal Reserve Cut Interest Rates Partly to Boost Inflation, but Will it Work? [Market Insight]

On February 4th, 1994, then Federal Reserve Chair Alan Greenspan announced a change to the targeted level for short-term interest rates in the United States. The press release (we didn’t have televised productions to convey such decisions in 1994) stated that the change was being made to “…sustain and enhance the economic expansion.”1 This change in interest rates being announced represented the first of seven consecutive increases made by the Federal Reserve over the ensuing twelve months.The reason I recall this event from twenty-five years ago is that our current Federal Reserve Chair Jerome Powell made a similar statement in early June of this year. He said that “we will act as appropriate to sustain the expansion”2, but this time he was referring to decreasing interest rates.

Hopefully you’re still with me because I want to back-up and explain. If you’re already a Fed follower or an economics junkie, this background may be unnecessary so bear with me.

The conventional belief is that a lower Fed Funds Rate will spur greater borrowing, investment and consumption. All elements that tend to support a growing, thriving economy, but may lead to unhealthy price inflation and asset bubbles if left unchecked. Likewise, a higher Fed Funds Rate may promote saving over spending, thereby slowing economic growth, stemming inflation and discouraging asset bubbles. Like an economic pharmacologist, the Federal Reserve seeks to set the Fed Funds Rate at a level that attempts to balance the euphoria of low rates with the austerity of high rates. This equilibrium is referred to as the neutral rate.

Let’s jump back to that statement from Chair Greenspan in 1994. To provide some historical context, the U.S. economy was in a period of growth following a relatively short recession at the beginning of the nineties. Chart 13 is a comparison of economic growth (Real GDP), unemployment and inflation from then and now. In comparing the two points in time, economic growth is similar, unemployment is much lower today and inflation is also lower today.

Can you determine which circumstance deserves intervention from the Federal Reserve? Further, can you determine which circumstance should prompt the Federal Reserve to increase or decrease interest rates? Of course there’s more data that goes into such a decision by our Federal Reserve, but the point is that in both scenarios it doesn’t appear obvious that an increase or decrease in the Fed Funds rate is necessary. Economic growth is modest, but positive. Unemployment is relatively low, certainly presently. Inflation is also modestly positive.

Like caring, diligent parents conferring the wisdom of prevention over remediation to their children, the Federal Reserve decreased interest rates this week for the first time since December, 2008. In an act that many are considering a preventative measure there is much to ponder in this decision. Should the Federal Reserve be attempting to increase borrowing, investment and consumption in an economy that is at or near full-employment and has a stock market knocking on all-time highs?

In that context it doesn’t seem to make sense. The Federal Reserve is basing the decision on signs of slowing economic growth, lower than desired inflation and the potential for adverse economic effects from global trade tensions. When Benjamin Franklin advised, “an ounce of prevention is worth a pound of cure”4 he was referring to taking precautions to safely transport hot coals within your home. The Federal Reserve is basing its attempt at prevention on its understanding of economic theory. Taking care to keep hot embers from dropping between the floor boards in your home makes sense and certainly causes fewer problems than the alternative. At this time, it’s questionable whether the Federal Reserve’s prevention actions will lead to its desired outcome or require a pound of cure.

The relationship between inflation and unemployment has tended to show that higher unemployment is consistent with low inflation and vice versa. Rationally, this makes sense. If there are many more people looking for jobs than are available, companies can pay modest wages and attract workers. If there are many more job openings than qualified workers, companies will need to increase wages to attract talent. This theory was made popular by William Phillips in the late 1950’s and is generally referred to as the Phillips Curve given the assumed inverse relationship between inflation and unemployment. 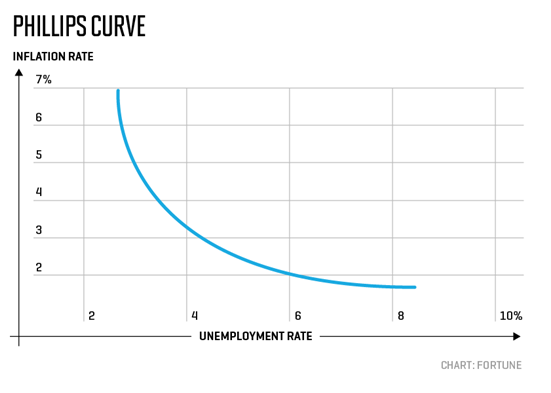 Nikola Tesla once observed that, “the history of science shows that theories are perishable. With every new truth that is revealed we get a better understanding of Nature and our conceptions and views are modified.”5

Our experience over the past several years in the relationship between unemployment and inflation may mean that we need to modify our conceptions of the Phillips Curve. Inflation has been low for several years, remaining under 2 percent for much of the past decade. Unemployment has been at or below 5 percent since 2015. So why is inflation so low with the unemployment rate at its lowest level since Neil Armstrong walked on the moon? The answer is not known, but speculations abound.

The reality is that the Federal Reserve has become more concerned with boosting inflation of late, which led it to reduce interest rates this week. The prescription for low inflation continues to be lower interest rates. It’s now time to question this relationship though and consider the unintended consequences of such action. The evidence hasn’t supported the relationship. The Federal Reserve dropped the Fed Funds rate from 5.25 percent in 2007 to effectively zero in 2008 and held it there until 2015. The inflation rate went from 2.3 percent in 2007 to 0.7 percent in 20156. Layer on top of that the trillions spent in a quantitative easing program to further stimulate the economy and the lack of higher inflation is even more confounding.

In Europe, interest rates are negative and the European Central Bank has communicated a willingness to reduce rates further. In Japan, interest rates have been at or below 1 percent since 1995. We are facing a serious economic problem globally. Traditional tools for incenting economic growth are not generating the desired or expected outcomes. In such an environment, it should not be assumed that the capital markets will react in a predictable manner.

The fact that Chair Greenspan increased interest rates in 1994 and Chair Powell decreased rates this year, both under the auspices of sustaining the economic expansion, is ironic. It conveys the complexity of our economy and exposes the rudimentary means by which we attempt to influence it. The investment implications of what is being described in this letter are considerable and debatable. You can expect that future letters may reflect on similar topics. After all, interest rates are a critical component of our economy.

As you well know, we manage your assets understanding that markets are inherently unpredictable in the short-term. How we think about relationships between unemployment and inflation may evolve or simply just change given different environments. How we think about constructing investment portfolios will continue to be based on our principles. Diversification, a long-term perspective, and discipline during times of investor exuberance or panic form the basis of our investment philosophy.

It is my great pleasure to inform you that Kimmie Moehring successfully completed the CERTIFIED FINANCIAL PLANNERTM (CFP®) exam this month. Kimmie has worked very hard to prepare for this exam and we couldn’t be more proud of her accomplishment. One of Birchwood’s core values is education and we’re so happy that Kimmie’s dedication to becoming a CFP® professional was rewarded. If you’re interested in learning more about the CFP® designation, we invite you to visit the CFP Board website. Please join us in congratulating Kimmie!