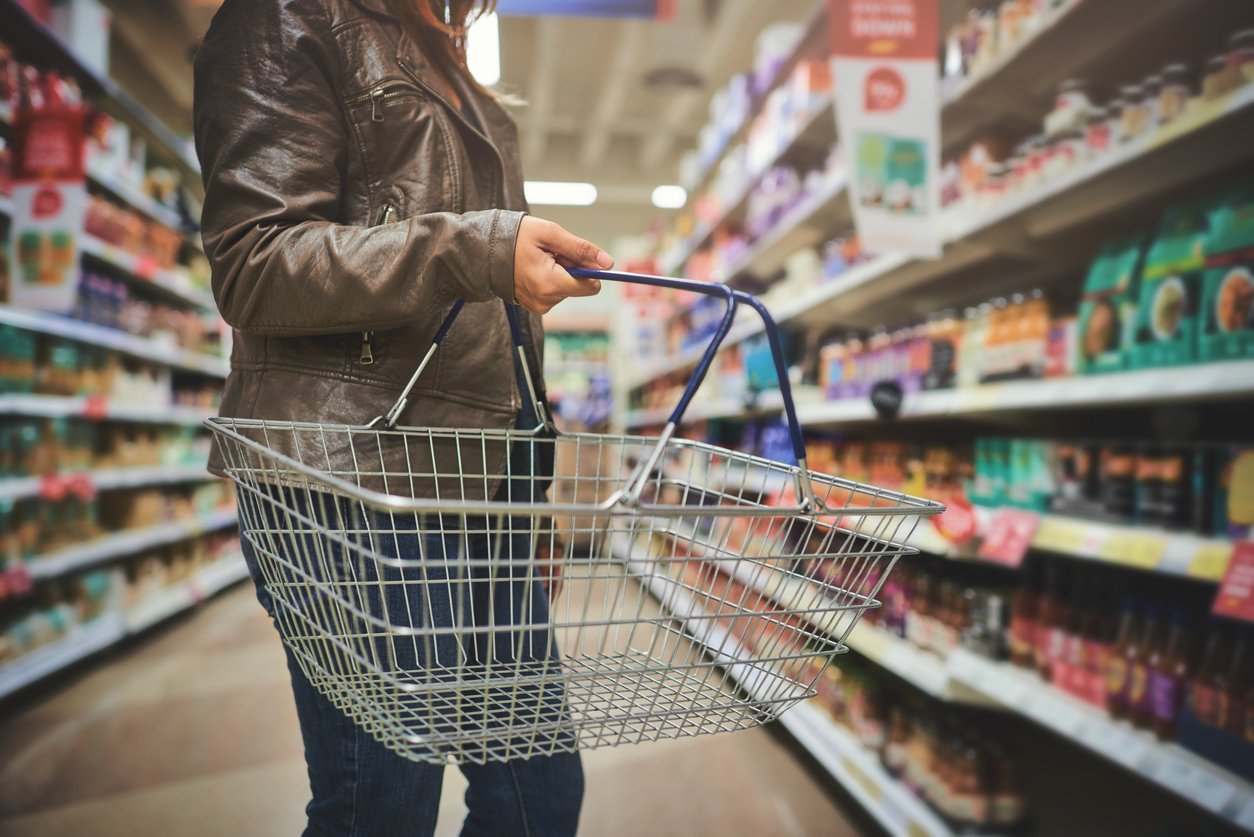 At least in some respects, it hasn’t been a very happy new year thus far. A new variant of COVID-19 blazed through the U.S. in early January. The Russian invasion of Ukraine in February led commodity prices to spike, extending and exacerbating the inflationary pressure already present in the economy. Hopes for continued improvement in our collective lot in the wake of a global pandemic faced a major setback as we witnessed and continue to witness the devastation and inhumanity emanating from the war in Ukraine. The insecurity stemming from these events and the continued weight of supply shortages and job market imbalances caught up with the stock market in January and February, sending the broad U.S. stock market down 8%1 over the two months.

Sentiment among U.S. consumers has been falling for several months, but a corresponding drop in their level of spending hasn’t happened. We can attempt to explain this divergence in many ways, including the persistence of COVID-19 weighing on sentiment while spending may be elevated due to the fiscal and monetary stimulus that has been poured over the economy for the past two years. How this relationship changes moving forward is difficult to predict. As monetary stimulus is reduced, which began in earnest when the Federal Reserve (“the Fed”) increased the Fed Funds rate on March 16th, only time will tell how consumers and the capital markets react. The market expectations are for additional increases in the Fed Funds rate throughout this year and into next year. Each rate increase signals to the capital markets that expected inflation remains too high and the economy remains strong enough to handle less stimulus. The gap between a rock and a hard place that the Fed will be trying to avoid is battling higher than desired inflation along with weaker than desired economic growth. This is the feared stagflation scenario and one in which the Fed will have to decide whether inflation or economic growth is the more pressing concern. 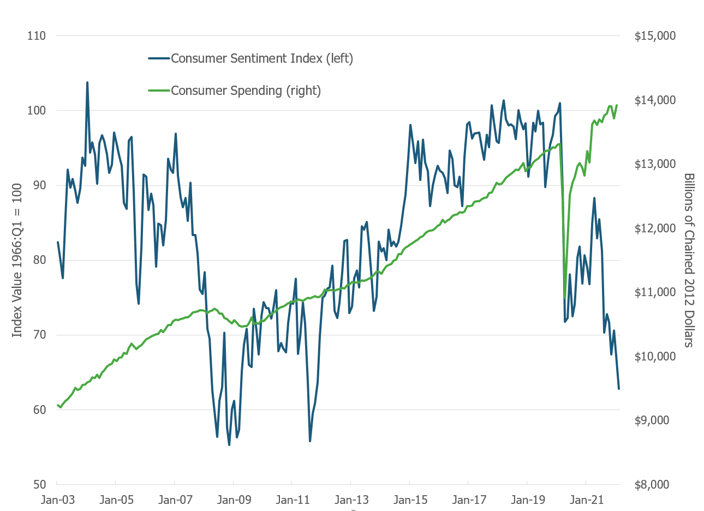 While it may seem obvious why high inflation is problematic in the economy, it may be less apparent why it poses a problem for the capital markets. In the economy, rising costs for goods and services leave us with less to spend unless or until our income adjusts to the higher cost of living. For those with a job that can and does provide a wage increase at least commensurate with the increased cost of things, inflation is less burdensome. For those in jobs with less bargaining power, those underemployed or unemployed, and for those in retirement, inflation can cut into spending power and reduce overall economic activity.

The Fed has a pretty big influence on the level of interest rates in the U.S. It will adjust interest rates in an effort to support full employment and moderate, stable inflation. Right now, the Fed has communicated its discomfort with the high level of inflation and has started to increase interest rates. Its aim is to slow demand and thereby temper inflation. In the capital markets, interest rates provide the basis for valuing all investments, such as bonds, stocks, and real estate. In its simplest form, an investor should only make an investment if they believe the return from that investment will be greater than an investment with less risk. If I can earn 0.5% in my FDIC-insured online savings account, I should only be willing to invest that money in a riskier venture if I expect to receive a return greater than 0.5%. As risk increases, so should the return I’m expecting from the riskier investment, otherwise why would I take the additional risk?

As interest rates increase, the appeal of the lowest risk investment option grows. If my online bank account now pays 1% interest, theoretically all other riskier investments should become comparatively less attractive and their values should fall until prospective investors find them appealing again.

At a more micro level, higher costs associated with making a product or delivering a service may be difficult to pass along to customers in the form of higher selling prices. Higher costs could come from the rising cost of materials, wages, transportation, or for companies that have borrowed money, it may come from the rising interest costs for those loans. These inflationary effects could reduce the company’s profitability or creditworthiness and thereby the value of its stock or bonds.

The Influence of Future Expectations

As with everything in the economy and capital markets though, there are very few if any absolutes. I just got done explaining why higher interest rates should lead to lower stock and bond values, yet the stock market is up over 8% in the two weeks following the Fed’s decision to raise interest rates and bonds are down less than 1% over the same period2. There are a variety of other factors that influence the value of investments. One of the bigger influences is expectations for what will happen in the future.

Expectations for the future are of more importance to the markets than what is currently being experienced. Expectations fluctuated considerably during the first three months of this year and led to significant market volatility. As new information is processed, expectations get adjusted. We are in a particularly challenging environment right now though because the general confidence in what to expect is relatively low. Will inflation continue at these high levels or will supply chain disruptions abate and catch-up with demand? Will the Fed’s efforts to slow inflation be effective or will it move too quickly and stunt demand too much? Will the war in Ukraine continue for days, months, gulp…years? Will additional variants of COVID-19 lead to further disruptions?

With high uncertainty about what to expect, it’s best to remain well-diversified and avoid having too much conviction in your expectations that you become blind to contradictory information. Referring back to the divergence between Consumer Sentiment and Spending, do those consumers answering the Sentiment survey have it wrong and they’re being too gloomy? The last time Consumer Sentiment was at these levels, it was a pretty good time to get invested in stocks. Will this turn out to be a similar opportunity?

As a closing thought, current market expectations are for the Fed to gradually raise interest rates over the next year or more. I find it difficult to believe that the Fed will be able to pull that off, but all I can tell you is that those expectations are likely incorrect. In such a situation, we are preparing for the capital markets to adjust expectations frequently over the course of the next year or more. As those expectations adjust, we may see stock and bond values move in dramatic fashion. If that is what comes to pass, know that we have designed portfolios with the knowledge that markets can be unpredictable and volatile over shorter periods. We believe appropriate diversification, not being overconfident in short-term expectations, and being prepared to rebalance your portfolio will provide better long-term results than trying to sidestep bear markets or load-up on bull markets. 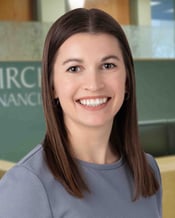 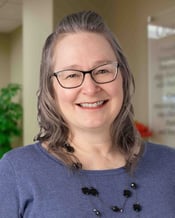 We are so grateful for the opportunity that you have provided us to participate in your amazing lives. Further, so many of you have chosen to share our name with your family, friends, colleagues, and neighbors. Last year, we had strong growth because of your confidence in the service that we provide. We can’t thank you enough for this as we are all driven by having an opportunity to help make the lives of our clients better. In February we welcomed two new employees, Kayla Berceau and Robyn Santana in the Client Service Specialist role. Kayla and Robyn have been terrific additions to our team. They are learning quickly, and we hope you get the opportunity to meet them in person soon.

Let us know if there’s anything we can do for you. Be well and thank you for the trust that you’ve placed in us.

Opinions expressed are not intended as investment advice or to predict future performance. No independent analysis has been performed. Investment decisions should not be based on information in this letter since the information contained here is a singular update, and prudent investment decisions require the analysis of a much broader collection of facts and context. All information is believed to be from reliable sources, however we make no representation as to its completeness or accuracy. All economic and performance information is historical and not indicative of future results. Asset allocation, which is driven by complex mathematical models, should not be confused with the much simpler concept of diversification. Asset allocation cannot eliminate the risk of fluctuating prices and uncertain returns. Rebalancing may be a taxable event. Before taking any specific action, be sure to consult your tax professional.