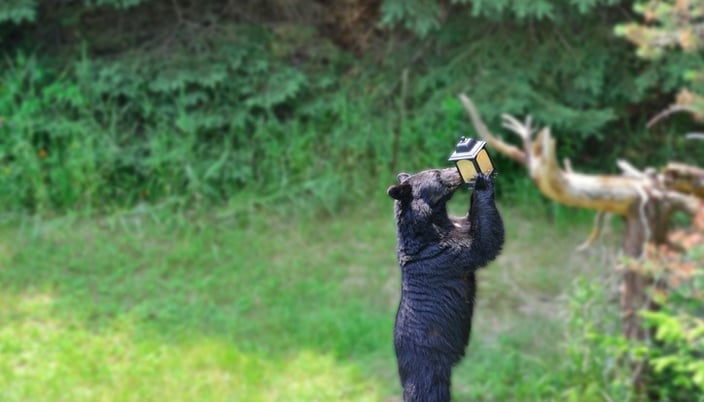 While I do live in an outer ring suburb of Minneapolis, I was surprised to hear that a local police officer had spotted a bear traipsing through our quaint downtown recently. The report suggested that residents shouldn’t be alarmed as it’s not uncommon to see bears pass through our town. Since my kids play baseball a couple hundred yards from the sighting and our home is less than a mile away, I can’t say that I shared the same sanguinity. We’ve lived in the community for over 15-years and have seen a lot of wildlife including coyotes and foxes, but never a bear. I can’t recall ever hearing of a bear sighting in the area.

I realize that many communities live with bears and likely have become accustomed to seeing and coexisting with them. I just didn’t realize that I might live in one of those communities. It’s alarming when you think you’re safe, only to find that a new threat has appeared. This recent bear sighting has me a bit unnerved, mostly because it was very unexpected. Certainly, I know that prior to the development that’s occurred in my town over the past few decades, there was much more diversity in the wildlife that likely included bears. Like the uncomfortably high level of inflation we now have in the U.S., it’s the unexpected reality of it that has been unsettling.

Above average Inflation—The First In Decades

Above average inflation in the U.S. is an economic condition that we haven’t dealt with in decades. It’s been talked about, and we’ve experienced heightened risk of higher inflation at times, but as can be seen in Chart 1, inflation has been relatively low and stable since the 1980’s. Resulting from disruptions in the global supply chain and labor market as well as an overwhelming fiscal and monetary stimulus response to the pandemic, inflation has leapt over the past 18 months or so. The basket of goods tracked by the U.S. Bureau of Labor Statistics shows that above average inflation is hitting nearly every line item on the American consumer’s budget.

In the early 1980’s, Federal Reserve Chair Paul Volker famously wrested control of runaway inflation. He did this by adopting policies that would control the amount of money in the economy. These controls led to sharply higher interest rates, higher unemployment, lower spending, and an economic recession. Chart 2 depicts the yield on 10-year U.S. Treasury bonds since Mr. Volker’s battle with high inflation. Interest rates spiked in the early-1980’s, urging consumers to save or invest instead of spend. After successfully bringing inflation down by the mid-1980’s, Mr. Volker exited his post as Chair of the Federal Reserve and was succeeded by Alan Greenspan. What has ensued has been a new era of Federal Reserve policy that went from fighting inflation to fighting to sustain economic growth. We’ve gone from earning over 10% on U.S.-backed bonds when inflation was roaring in the early-1980’s to earning about 3% now. Bond prices move in the opposite direction of interest rates, so as interest rates have fallen over the past 40-years, it has been a great period for bond market returns.

What May Be Next

With higher inflation now a reality, the question being asked is whether interest rates will continue to move higher and bring an end to the long period of strong returns for bond investors. Our Federal Reserve now must change its focus from stimulating the economy through lower interest rates and increasing the supply of money to combating inflation, which will likely require higher interest rates and a decreased money supply. The ultimate consequences of the path that the Federal Reserve is now on are debatable, but weaker economic growth and higher unemployment seem probable. An economic recession also seems probable, but not assured. To bring inflation down, either the supply of goods and services needs to increase, or demand for those goods and services needs to decrease, or both. The Federal Reserve is and will continue to take actions that should reduce demand, but the lingering effects of the pandemic make the supply side of the equation more difficult to resolve. In the end, we do not believe that sharply higher interest rates and a prolonged period of poor results from bond investments akin to what happened in the early 1980’s is a likely outcome.

Returns on most investments have been disappointing this year. Bonds have fallen in value as interest rates have risen. Stocks are down as stimulus is being removed by the Federal Reserve and expectations are for weaker earnings as operating costs increase due to higher inflation. It’s a good time to remember that capital markets tend to move based on expectations. The economy is generally gauged by looking backward. As a result, capital markets and economic data don’t always move in the same direction.

At present, good economic news may actually cause the capital markets to fall in value. The Federal Reserve is raising interest rates to try to cool down the economy. If economic data doesn’t show progress toward that end, more interest rate increases are likely to come, which may be received negatively by the capital markets. Weakening economic data may indicate that the Federal Reserve’s actions are having the desired effect and perhaps fewer interest rate increases will be needed and high inflation may begin to wane. In this scenario, stocks and bonds may increase in value. While this relationship is loose and difficult to anticipate, it is also counterintuitive.

In the fight against inflation, expect some Market Volatility

We are in an economic situation that is new for many investors, consumers, business executives and government officials. Market volatility is likely to continue as the government attempts to tame inflation without completely stifling the economy. While I haven’t yet taken any precautions because of the bear sighting in our town, I am on a higher level of alertness when taking my dogs for a walk or jogging early in the morning. I’ve seen bears in zoos, on TV, and read about them, but I can’t say my reaction to actually seeing one in my town would at first be rational. Now that we’re experiencing high inflation, investors should be careful to not overhaul their long-term investment strategy based on what has transpired over the near past.

After a tumultuous first half of the year, online savings accounts are now paying interest of 1% or so. Government-issued I Bonds are set to have an annualized yield over 9%. It likely goes without saying, but stock valuations are much more attractive now than they were at the end of last year. For the patient, disciplined investor, long-term return expectations have improved. Last year’s market that presented few long-term opportunities has been transformed into one that offers many areas of opportunity within the stock and bond markets. New types of assets that flourished on over-stimulus, such as digital currencies and NFTs, have seen a reckoning.

We are being careful to not attempt to change portfolios based on what has just occurred, but rather how we believe markets will perform moving forward. We know when building portfolios that market volatility will occur over the life of that portfolio. The different reasons for that volatility, the persistence, and the duration of that volatility are unknown. Our work focuses largely on trying to accommodate for these unknown variables. We are constantly taking in new information and reassessing our long-term expectations for how different types of investments will perform. As those expectations change, we will make changes to how portfolios are invested.

I always start these letters with the intent of drawing your attention away from whatever headlines are driving the markets daily. It can become so easy to project forward what is happening today and that’s when investors may make untimely decisions that seem very rational. I fully recognize that the anxiety of being invested in a market environment like we’re currently experiencing can be overwhelming. I hope that letters like these are somewhat helpful to relieve some of that anxiety through better understanding of what’s happening. In addition, I hope this is a reminder that you are not alone. We are here to support you, listen to you, and help you make good decisions. Please feel free to reach out anytime.

I’ll be sure to provide any further bear-sighting updates with you. For the time being though, I’ll be eagerly keeping an eye out for bulls too. Our town’s annual rodeo is this month so odds are good.