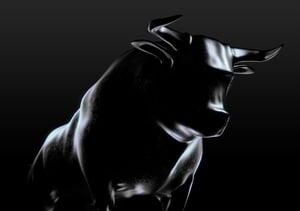 If the bull market of the 1990’s can be referred to as the “Raging Bull”, the current bull market (a period of rising stock prices) could easily be dubbed the “Resilient Bull”. It has outlasted all of its predecessors, turning 10 years-old in March. Capital markets can be analogous to a pendulum. They tend to swing too far one way only to reverse course and swing back the other way, restoring balance at some point along its path. Often referred to as “reversion to the mean”, the concept implies that markets can’t go up forever and will eventually revert. The implicit assumption is that market expansions or contractions are time dependent. The longer they persist, the less likely they are to continue. As our current Resilient Bull is demonstrating, this notion of time dependence in market cycles is flawed. So the question remains of how to determine when the capital market pendulum is nearing its apex and about to reverse course.

The Raging Bull ended in early-2000 in an Icarian fall from outrageous valuations. The Resilient Bull will come to an end at some point as well. The ensuing bear market (a period of falling stock prices) will undoubtedly be painful and anxiety-inducing. That bear market will also end though, and will usher in a new bull market. This is the cycle that defines our capital markets and has led to outstanding wealth creation over decades despite periodic crises.

The current crisis facing our Resilient Bull is a breakdown in trade negotiations between the U.S. and China. After months of seemingly positive momentum on a new trade pact with China and supposedly with a formal agreement in sight, negotiations stalled in early May. Increased tariffs that President Trump had indefinitely postponed in March were put into effect on May 10th. The U.S. administration also took steps to impose tariffs on another $300 billion of imports from China, but these are unlikely to go into effect until July at the earliest.

News of the faltering negotiations led to a sharp decline in the global stock market, the biggest drop so far this year. The S&P 500 Index dropped about six percent, just after minting a new all-time high in early May and completing a full recovery from the market swoon during the last three months of 2018. So can our Resilient Bull overcome this threat?

The question is easy to answer, just go to any financial news website, but a correct answer is obviously impossible to really know. Seeking an answer to this question and then making investment decisions based on that assumption is what gets so many investors into trouble though. There will always be that investor that rises to fame for profiting on a market call or prediction that came true. For each of these clairvoyants there are many investors that weren’t so fortunate in their predictions. What is predictable about capital markets is the cyclicality of them.

A swinging pendulum, we know it will swing back the other direction at some point. What we don’t and can’t know is when it will reverse course.

Behind the commotion of trade negotiations with China is an economy that is quite strong and diversified. The jobless rate in the United States is 3.6 percent, the lowest since 19691. The U.S. economy grew by 3.2 percent during the first quarter of this year and has grown by an average of 3.3 percent over the past year, the fastest rate of growth since 20152. So far this year, over 70 percent of U.S. companies have reported profits that exceeded expectations. While profits can be manipulated to a certain degree, over half have also reported higher than expected revenues, which is a number that is more difficult to adjust3. In this context, it isn’t apparent that our Resilient Bull is running out of steam. Except in hindsight, the gyrations of the capital markets are an unknown. Don’t let anyone convince you otherwise and jeopardize your financial well-being.

Investing is inherently risky. It involves shifting capital from those that have it to those that need or want it. The primary reason that investors do this is with the expectation of a financial gain. We make these investments knowing there is some degree of risk. In theory, we are willing to make a riskier investment if we believe that the financial gain will be proportionate. It is in this respect that we seek to allocate your capital. According to the level of risk that we have agreed upon with you, we invest on your behalf for a financial return that is commensurate with that level of risk. In the current environment, we believe, but can’t know, that returns are likely to be lower over the next several years than they have been over the past several years. This is due to a combination of factors including current market valuations, global monetary stimulus efforts of the past decade, historically low interest rates, and global government debt levels.

As we make investment decisions for your accumulated financial wealth, our focus is not on attempting to forecast the direction of markets in the near-term. Rather we concentrate on positioning your investments for long-term success in meeting your goals or supporting your lifestyle. We understand that market behavior over short periods can and will be irrational and unpredictable.

A longer-term mindset allows us to be less emotional or distracted in managing your investments.

As this Resilient Bull continues, we are pleased to see your investments appreciate. When the longest bull market in history eventually comes to an end, we’ll be here to help guide and support you through it.

Earlier this month, we added to our Birchwood family. The newest addition to the team is Brett Hall. Brett joins us as a Client Support Specialist and will be working alongside Stacey, Ellen and Kimmie to provide operational support for our clients and advisors. Brett is eager to contribute and brings a lot of positive energy to the office. Please join us in welcoming him to our team.