Managing Your Wealth: Interpreting the Current Volatility of Capital Markets and Your Investment Strategy [Market Insight]

I’m sorry that my letter happens to be delayed this quarter. While finishing a first draft, the stock market reminded us all of its unpredictability and potential for sudden course corrections. Instead of sending this letter out in its original and dated form, we felt it obviously imperative to address the current market correction. At the same time, last year was such an uncommon year in the capital markets that I decided to retain much of the original letter’s content for your edification. Despite the understanding that market corrections may occur at anytime and for unpredictable reasons, they can still be unnerving. When market volatility increases it is important to remain disciplined and stick to your long-term investment strategy. Thank you for your continued interest in these periodic letters. The intent is to provide you with our interpretation of the current capital markets in the context of investing for the long-term and to regularly communicate our investment philosophy in managing your wealth.

Black Swans in the Financial Industry

In 2001, Nassim Taleb’s Fooled By Randomness was published, giving readers a new term for events that defy expectations in remarkable fashion. A “black swan” is an event that occurs so far outside of expectations that it would have seemed improbable, if not impossible, prior to taking place. The term comes from the discovery of black swans in Australia in the 17th century1. Until their discovery, a black swan would have been unthinkable in nature. Now it is estimated that there are up to one million black swans on earth2. Since Mr. Taleb introduced the term, the financial industry has been quick to trot it out whenever capital markets behave in an unexpected manner.

Like the proliferation of black swans in the wild, it too seems that capital market black swans are becoming less rare.

Capital market volatility or rather the lack thereof, was the epicenter of black swan sightings in 2017. By many measures, the U.S. stock market was the least volatile in decades. The S&P 500 Index has produced a gain every month for the past fifteen months3, a streak that may be coming to an end this month. We need to go back to the late-50s to find a similar string of consecutive positive months4. On a daily basis in 2017, the S&P 500 Index fluctuated by more than one percent on eight separate days and never more than two percent. In 2016, the index moved by more than one percent forty-six times5.

The CBOE Volatility Index (“VIX”), which is broadly interpreted as an indication of investor anxiety in the stock market, had a closing value below 10 on fifty-two days last year. Since 1990, the VIX had only closed below 10 on nine separate days until last year. The median closing value for the VIX is 18 and it never once closed at or above that level in 20176.

Perhaps the most remarkable black swan event last year came from the rapid rise in the value of cryptocurrencies, such as Bitcoin. In so many respects 2017 was an atypical year in the capital markets, but it may be remembered primarily as the year of the cryptocurrency bubble. These digital currencies provided perhaps the most textbook example of a bubble that we’ve seen in a long time. Bitcoin appreciated in value from under $1,000 per unit at the start of 2017 to a peak value of just shy of $20,000 in December. As with a proper asset bubble, the value of a bitcoin unit has since collapsed back to under $10,0007. 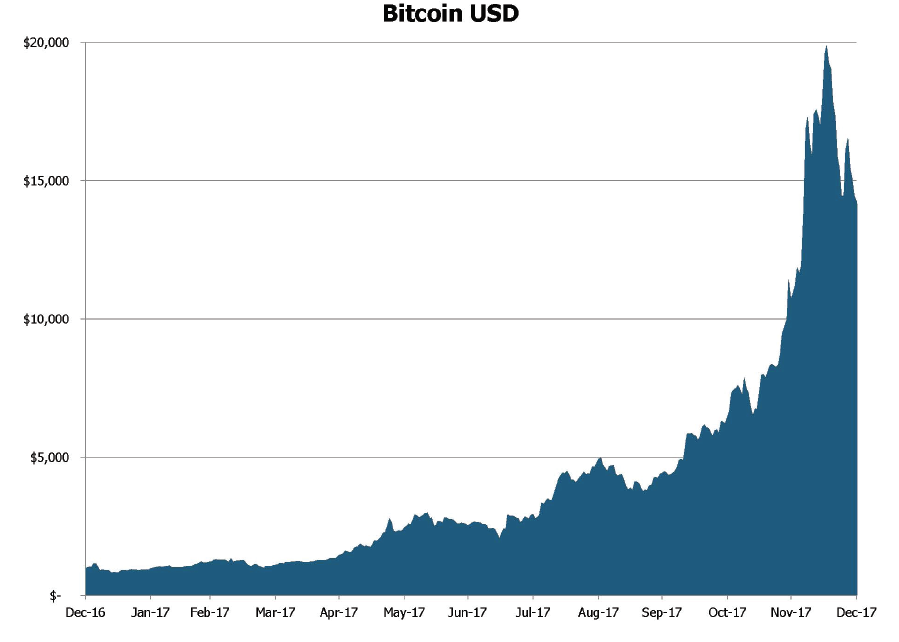 As we now know, volatility has returned to the stock market in the past week with stocks around the world giving up the gains that were experienced during the first month of the year in just a few days. Taken together, low volatility in the stock market and exuberance around a relatively new and esoteric form of currency may seem to be warning signs for investors in the stock market. Our experience has been that markets tend to peak in periods of excessive risk-taking. A market where investors don’t seem to attribute a sufficient level of risk to investing in stocks may be seen as a sign of a market peak. Likewise, the formation of an asset bubble has been known to presage a broader market downturn. Take the bubble in technology stocks in the late-90s and the real estate bubble in 2007 as prior examples.

While we are avoiding cryptocurrencies as a long-term investment in your portfolio, we are not avoiding stocks despite the recent market turmoil. It is certainly possible that the current market disruption continues and we see the stock market record a meaningful drop in value, but the potential and inevitability of such an event does not change the long-term attractiveness of investing in stocks. The basis of a stock’s value is a company’s ability to grow its earnings over time. Invariably this value and the perceived earning power of a company will fluctuate from time to time. While the current price of stocks in general is relatively high, long-term investors are unlikely to find a better option for growing their wealth over time.

In our opinion, it is true that the return on stocks over the next five years is unlikely to surpass the 15.8 percent return that we’ve enjoyed over the past five years8. However, it does not follow that stocks are now a poor long-term investment. So, then are stocks a poor short-term investment? Well, yes, they always are and always have been. The near-term is unpredictable and, very often, irrational making short-term stock investments more of a gamble.

The Old Adage is You Want to Own Stocks, Not Rent Them

The impetus for the recent market downturn seems to stem from a report on February 2nd from the Department of Labor that wages for Americans increased at a rate of 2.9 percent last year9. That marks the strongest wage growth since 2009. On its face one might interpret that to be pretty good news. You may recall that consumer spending constitutes approximately two-thirds of the economic activity in the U.S. So putting more money in the hands of those consumers is likely to generate more spending and economic growth. That is precisely the interpretation that the capital markets had, which cascaded to an expectation for higher inflation and higher interest rates.

We do believe that there is reason to assume that we are headed toward an economic environment that includes higher inflation and higher interest rates, but the data released on February 2nd is hardly a smoking gun. Rather we see the recent market volatility as likely being instigated by the wage growth data, but being exacerbated by other factors, such as a prolonged period of complacency in the capital markets, algorithmic trading systems and a general panic among short-term minded investors. From a fundamental perspective, there are a great deal of positive factors that we believe will prevail and lead to attractive long-term performance on your stock investments.

In It For The Long Haul

It is always important to set your expectations given that markets have been so sanguine up until very recently. Investing in stocks is inherently risky, particularly over short periods. We remain confident in our process and discipline as it is not contingent on our ability to foresee the direction of capital markets over the near-term. So called black swan events may very well occur more often than seems possible, making the term lose much of its original meaning. Yet as long-term investors with a diversified portfolio we seek to limit your exposure to these market events and potentially take advantage of them.

We realize that the recent market turmoil may be causing anxiety regarding your investment portfolio. Even for those that have a long-term, diversified portfolio and a solid plan for reaching their financial goals, the effects of a market disruption can elicit a visceral reaction. We are only human and react to perceived threats. If you are having feelings of anxiety regarding your investments or your ability to meet your financial goals, please reach out to us. Just knowing that the stock market can be volatile at times doesn’t necessarily make it any easier to stomach when a drop in value occurs.