It has been quite some time since the phrase “cash is king” has been uttered. In general, the idiom has been used to make the case for investing in cash securities, despite the unremarkable growth potential of the asset class. The benefits of investing in an asset that is likely to preserve its value in a broad stock market downturn can be underappreciated until that downturn actually occurs. In a market environment where stock market valuations are largely higher than average and bond prices are also exceptionally high, cash should be considered as an appropriate investment allocation in a balanced portfolio. The problem has been that the yield on cash securities has been nearly non-existent for almost a decade. But that’s beginning to change. 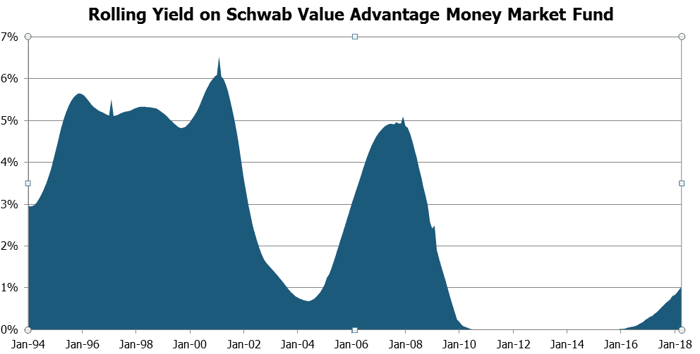 As you can see in Chart 1, the yield earned on cash investments has been less than 1 percent since 2009. Following the extraordinary actions taken by the Federal Reserve to stem the financial market crisis in 2008, short-term interest rates dropped to nearly zero. The Federal Reserve reasoned that pushing interest rates so low would give reprieve to indebted companies and individuals, reducing the cost of borrowing money. Additionally, with savings accounts earning little to no interest it may prompt investors to move their money into stocks and encourage consumers to go out and spend instead of save. All of these intended consequences played out and became a sort of hitchhiker’s guide for central banks when facing an economic recession. I’m not going to delve into the pros and cons of the Federal Reserve’s actions, the consequences or the efficacy. This letter isn’t intended to be a dissertation nor is it intended to bore you to tears.

Just as the Federal Reserve took action to reduce short-term interest rates to stem a financial market crisis, it has now begun to unwind those actions. You can see the immediate effect in the savings account at your bank, which now offers interest! As investors, we see the effect in the yield offered on short-term bonds, such as certificates of deposit and Treasury bills. Chart 2 is a similar looking chart, but depicts the yield earned on lending money to the U.S. government for twelve months.

Chart 3 shows the difference between what an investor can earn on a ten-year Treasury minus what can be earned on a two-year Treasury.

Yields on a 10-year and 2-year Treasury

As the difference between the yield on a ten-year and two-year Treasury approaches zero, the capital markets tend to get a little skittish. As you can see in Chart 3, the recessions of 1990-91, 2001 and 2008-09 all coincide with this chart turning negative. While the current levels remain positive, the trajectory is raising concern among some investors and market volatility has risen. While I thought it important to share Chart 3 with you, we are not anticipating an economic recession any time soon. On the contrary, economic conditions are quite strong. As we’ve noted before, unemployment is exceptionally low and corporate earnings are very strong.

The potential allocation to cash-like securities would be intended to add diversification to the bonds in a portfolio. Our approach to investing your assets does not hinge on our expectations for the near-term direction of capital markets. Instead we seek to create a balanced portfolio that takes into account current market conditions, your financial goals and tolerance for risk, and what we know about the long-term relationship between different types of assets. For instance, we know that historically bonds have done a good job of balancing a portfolio of stocks by preserving value during a stock market downturn. However, the ability of bonds to preserve value given the current market conditions is compromised. Long-term interest rates remain low and bond prices remain high. In the event of a stock market downturn, we would expect bonds to provide some protection, but certainly not as much as when the interest they were paying was much higher than it is today.

This is where cash may again be worthy of being crowned, or at least worthy of stealing some of the portfolio allocation currently held in bonds. We’d like to see the yield on cash move higher before making such a change though. We continually evaluate the allocation of your portfolio, but are not quick to make changes. While the markets may change quickly, as they did during the first quarter of this year, the longer-term relationships between different asset classes and the fundamental conditions of the economy don’t change nearly as abruptly. We believe that taking such a disciplined approach to investing your assets is critical to long-term success.

We’d like to once again thank you all for including us in your lives. The relationship that we have with you is so special to all of us and influences all of the decisions that we make as a firm and as your financial advisor. As the regulatory bodies that oversee our industry struggle to provide the investing public with a clear message, we hope that you are aware of our fiduciary duty to always act in your best interest. We strive to eliminate perceived conflicts of interest as the trust that you’ve placed with us is paramount. We are very thankful for the opportunity to serve you and your family.

Chart 1
Source: Morningstar. Monthly yields for the Schwab Value Advantage Money Fund – Investor Shares are net of fees and were downloaded from Morningstar on May 1, 2018. The use of this fund is not intended to be an endorsement and is used solely for illustrative purposes.

Chart 2
Source: U.S. Department of the Treasury. Daily yields were downloaded from the Federal Reserve Bank of St. Louis on May 1, 2018.

Chart 3
Source: U.S. Department of the Treasury. Daily yields were downloaded from the Federal Reserve Bank of St. Louis on May 1, 2018. Difference calculation performed by Birchwood Financial Partners.