Thank you for joining us for our second in a series of Market Insight online calls. In this week's call I focused on the long-term consequences of government stimulus, which is important because government stimulus is breaking all bounds and will likely have long-term consequences for investment results, not all of which are bad. This is a rather big topic, but I focused on what I think are the most important points and what the investment implications might be for portfolios and expectations for returns.

What is government stimulus?

Our current recession is being fought with both fiscal and monetary stimulus.

Why is government stimulus used?

Government stimulus is used to prevent a mild recession from turning into a depression. Using stimulus is intended to lessen the impact of a recession but also to shorten the time that the economy is in recession. The shorter we are in a recession the lesser the impact and consequences from the cycle we can get into as illustrated in the Graph 1 below. 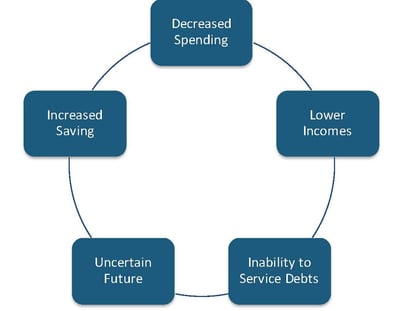 Stimulus is also intended to restore our confidence and promote spending, save less, or even go out and invest in something like stocks or a new house. If we’re not sure if we’re going to have a job in six months, it’s unlikely that we’re going to go spend money or invest in anything with much risk to it.

What are the risks of government stimulus?

Does Government Stimulus Create Inflation?
Based on what I’ve been reading and listening to, inflation is often the number one concern in regards to government stimulus. Inflation is actually a good thing, but we don’t want hyper-inflation. For example, we want to avoid 5-7 plus percent inflation, but 2-4 percent inflation is actually pretty healthy. The target inflation that our Federal Reserve has is 2 percent per year. A worse scenario would be deflation. Our aging population spending less and advanced technology, which reduces the cost of items, puts a drag on inflation. Since the early 1980’s, inflation has been falling and the Fed has had difficulty hitting its 2 percent target for several years1. As you can see in Graph 2, this period of falling inflation since the 1980's has corresponded with increasing debt, so the connection between increased spending or higher debt levels and higher inflation hasn’t proven true over the past several decades. 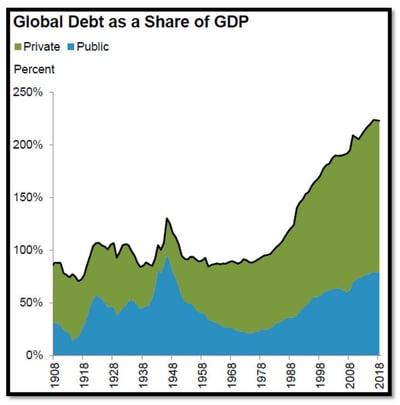 Is Government Stimulus Ineffective?
This is a difficult question to answer. It’s easy to see that the recoveries have taken longer in the past few recessions, but it’s important to also question how much worse could the financial crisis in 2008-09, for example, have been had we not used stimulus? In Graph 3, you can see what happened to jobs and how long it took us to get back to where we started pre-recession in terms of employment. What would this line look like without government stimulus though? 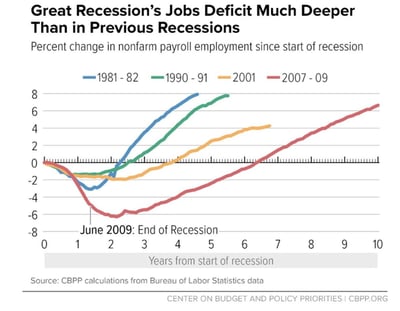 Graph 4 shows the current COVID-19 recession. The blue line is our economy’s potential growth rate. The red line is the actual growth in our economy, and the dotted lines represent the expectation for the recession we’re in right now. You can see how long it took us to get back to the blue line in the Great Recession. It’s likely going to take us a long time to get back to the blue line in the current recession. If you take away the $2 trillion that was spent by the government to support businesses and individuals and the actions taken by the Federal Reserve to provide liquidity to the financial markets, I think it’s hard to argue that it would have been better had the Feds done nothing. 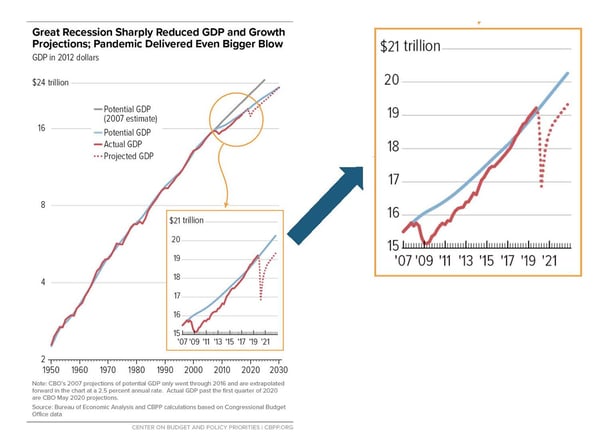 Will taxes be higher and are we putting a burden on future generations?
The way that government operates is different from the way you or I manage our personal budgets. The government does not necessarily need to balance the budget so there may not be a need to increase taxes to simply pay off our debt. To illustrate the blue line in Graph 5, it shows how much interest payments represent as a percentage of what our government spends in year. In the past 20 years, we have spent less than average on interest payments on our debt as a nation. At the same time the green bars, which represent actual payments, have increased. This is a big function of the fact that interest rates have dropped throughout that whole period, and we’re spending more on other programs like Social Security and Medicare. To think that our government is going to face a financial crisis because of the interest payments required to finance the debt that we’ve taken on is not necessarily accurate for a number of reasons. 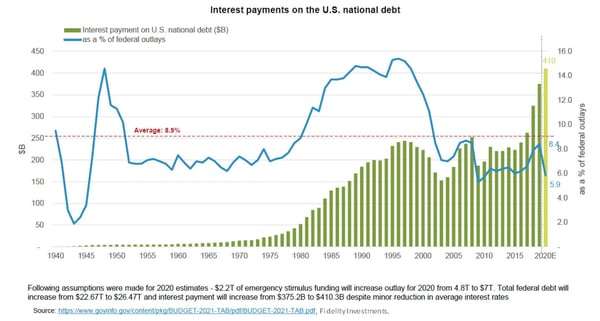 Our deficit this year was projected to be $1 trillion during the fiscal year. With stimulus due to COVID-19 we’re looking at a deficit closer to $4 trillion, and yet the market doesn’t really seem to care. Until the market cares, I’m not sure that politicians will care. The way I see it, we may see other reasons taxes increase, but it’s not necessarily to service the debt from stimulus.

Moral Hazard Risk
Last, I’d like to discuss the moral hazard risk, which is an idea that if I’m not going to have consequences for my actions as an investor, I’m probably going to take some risks that I wouldn’t otherwise take. For example, airlines are currently a focus of this discussion. Should airlines receive government assistance when they’ve been taking out a lot of debt in the past several years and buying back stock as opposed to keeping a clean balance sheet and building up cash in the event that we run into a recession? This is a common discussion during recessions—who do you save, who’s worthy and who’s not? In my opinion, there is always risk you wouldn’t have taken had you known that something like a global pandemic would happen when it did. Airlines will likely have to answer questions about their actions and potentially face additional regulations like banks did following the 2008-09 financial crisis.

Government stimulus needs to be quick and targeted. If we spend time asking who’s worthy and who’s not in the heat of the moment, we risk losing the effectiveness of stimulus.

What does it mean for my investment goals?

So how might our current government stimulus effect investments in the future? I believe we can expect: